The Church Postil was by Martin Luther considered as being "the best of all his books," There was a great need for Luther's theology. Sound understanding of the Bible and the Gospel did not exist by the majority of the preachers and the church as a whole in Luther’s time.

Most pastors in those days were not able to make their own sermons, and were dependent on Gospel lessons, and sometimes they read in the church a sermon by another minister. Sermons that often were used for this purpose were those by Tauler (d. 1361), and those by Geiler of Kaiser Berg (d. 1510). But since they were not free from errors, Luther decided to write studies, interpretations and pericopes and did that in the order of the church year. Martin Luther made them available and wanted the preachers to use them instead of those with errors and heresies.

Luther’s objective was not only the fact that the preachers were used to church services with liturgy given in books and forms. Which was the reason that they were unskilled in studying for themselves; but also to prevent that the works of sectarians and the fanatics would be spread. However Luther's intention never was for the preachers to let them take it easy and cause them to be lazy by only using sermons written by Luther and other good books. So doing never pray and failing to read and study the Scriptures. 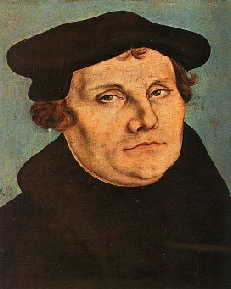